Somewhere in Croatia, close to midnight. About 50 runners have gathered at this dark place near Baške Oštarije. Mandatory kit-check and race briefing. Please stand in line and show your first aid kit, GSM and space blanket…

Uh oh. The impressive race director is striding straight towards me. Had this coming for a while. Will this be the race where I will be disqualified before even starting?

Another ten minutes to go before departure. We are a 90 minutes bus drive from Starigrad Paklenica, a lovely seaside town in the Velebit channel, where I plan to reach the finish line tomorrow afternoon. Not many foreigners here this year.  A French, an Italian, a German and undersigned from Belgium. I feel the pressure. If I fail to finish or get injured, it will have been the sandals, for sure. But my challenge lies elsewhere. I have been on the road for the last three weeks. Feels like I haven’t run for ages. Drinking beer when thirsty, residing in air-conditioned spaces nearly all the time, I feel that I am way too heavy and not acclimatized… Even at midnight it feels warm and I heard all those stories about the scorching heat and exposed stony slopes making this race hard to finish.

The Velebit midnight edition sets off into the dark. Supposedly more feasible to run during the night. The plan is to speed up and gain some advantage on the time limits. It takes me less than one hour to realize that things may turn out differently. Even the night is hot. Moreover, the word wilderness is very appropriate. Marked tracks, but the overgrowth indicates they are not that popular. The track, if visible at all, is littered with loose rocks and fallen trees. Arrows at the junctions, some red-white tape along the track and some route markings. GPS is obligatory, and after taking the wrong track a couple of times I start to understand why.

Sweat is pouring and my water supply is diminishing very fast. I carry some empty spare containers, but the 1,5 litres I carry will not suffice. Luckily, shortly after we pass some remnants of an old shelter, I spot an old signpost indicating “voda”. Hauling a bucket from the well, I knock down 750 ml in one go. No washing, another signpost says. Soon I’ll find out why. 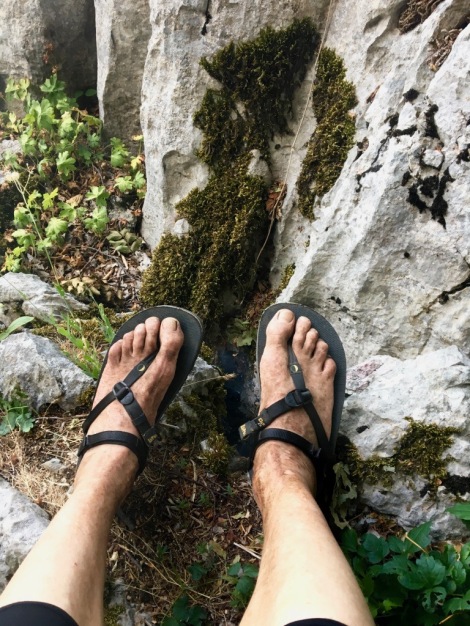 Daylight breaks on the Velebit Ridge

Daylight breaks. This will become a long day, no doubt about it. After 18 km we bump into CP 1A: a 4-wheel drive, a tent and a camp fire. Someone notes down my number and I can pierce my race bib in the designated area to prove I visited this point. They seem puzzled I made it this far. Some bananas and coke bottles, no water anymore. This is it. No water anymore?? My refuelling expectations are being reset. One of the guys sighs, and digs up a bottle from the tent. I replenish and set off.

The granite path on the Velebit ridge..

Some kilometres further near a hut there’s further another “voda” sign. I decide to follow it. About 200 meters off the route there’s a rusty water pump. I drink like a camel and pursue my way up the cliffs. Haven’t seen a runner for a while. The sun starts burning in a marvellous granite landscape. Far below I see the deep blue sea.

Next hours under the rising sun are still feasible, but the terrain is hard at times. My speed is not as high as I would have wanted it to be. But everything is pretty OK when arriving at the second checkpoint. Where we meet up with the marathon runners. Here again we have to haul up water from a water well to fill up our bottles. Some runners don’t really seem to think and wash their faces, hands or buffs above the well. Enraging some of the older runners. No fun drinking someone else’s snot or sweat. There is some coke and bananas. I have one hour margin on the cut-off when I leave.

From here the climbing really starts. Stony, tough, very limited shade. Sweating like hell. And have to ration my water time after time. Damn, I should have brought my three-litre bladder. Would feel much more comfortable. I still have the 1.5 l and a 600ml spare that I didn’t fill up yet. Next stop I will. For the whole day, there has been a constant leapfrogging going on. I pass runners during the speed hikes uphill, get passed by on the downhills.

Finally reaching the highest point of the race at 1750 m altitude, I notice a change. I am losing speed. A combination of heat exhaustion, the lack of training and fear. So far, I managed to stay ahead of the cut-offs. The check-points are nothing more than one or two guys sitting near a makeshift shelter next to the tool for punching holes in the race bib. Self-service. 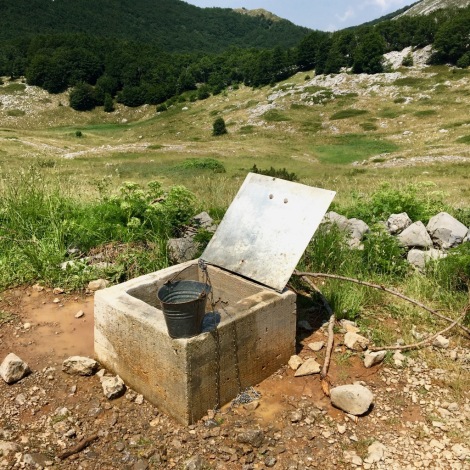 Water is usually found in one of the “self-service” water points along the routes. We pass through old minefields, remnants of the bloody war that raged when ex-Yugoslavia fell apart in the early nineties. 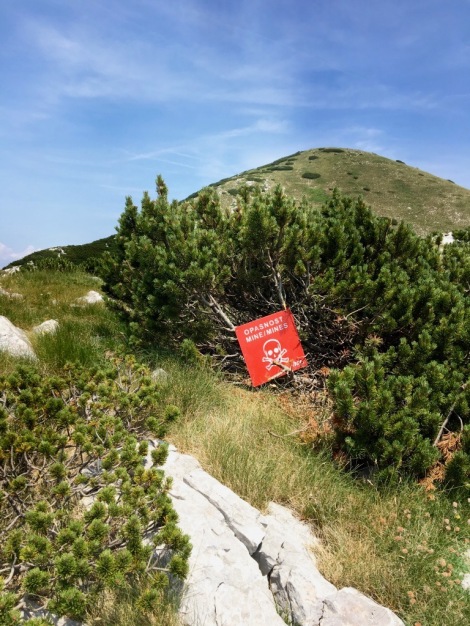 Stay on the path

I get even slower reaching the second highest top. I leave the next check-point 5 minutes before the cut-off. Sun is lowering, but it is still so hot. A cruel stony descent later, I am done. Dead man’s walk. I want to sit down and cry. But I know they only way out of here is by my own feet or by helicopter. I scoop water from a spring on the last hill. Creep forward. Moved 2 km the last hour. 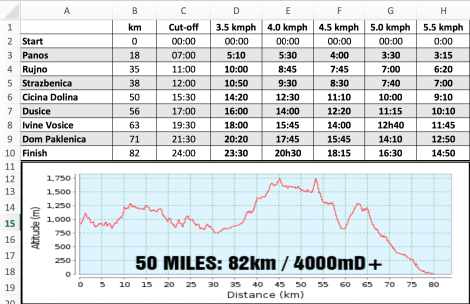 Race plan. The last hill was too much this time.

Later I hear from the home front that my tracker hasn’t moved for hours. People at home wondered what happened. Not the slightest mobile coverage here in this wilderness. So no updates on the internet.

Reach the control point. Way out of time. Disqualified. The guys tell me I can walk to the finish. What? DNF means walking to the finish? Even though I am disqualified and 1.5 hours late, I decide to run the last 15 km and try to arrive within the race limit, which means before midnight. The sun is setting. A gruelling 1200-meter descent to sea level. I run like a machine, catching up: 15 minutes, 30 minutes, 45 minutes, 60 minutes. I arrive at one of the last major check-points where one can choose to sleep tonight or to be escorted further down the mountain by some volunteers to a car. I ask for a banana, drink water and announce my intention to continue. The lady calls the finish line. I am cleared to go. My feet hurt like hell. The path became a stony road in the meantime. I keep on pushing. I won back  75 minutes already, only 15 minutes short. Is this heaven or hell? Cannot decide. I curse when a blister pops.

At 00h15, I finally run across the finish line. A mere 15 minutes after the final cut-off. They have been waiting. With pizza. Just didn’t make it in time. But finished the whole thing, anyway. The race director tells the man behind the computer to note down my name. I believe I did something that hasn’t been done before. And with a little more courage I might have finished in time. Or perished on one of those stony hills with a heat stroke. Who will tell…

Simun the race director waves and says, “goodbye amigo”. One of the volunteers brings me to my hotel. Next day, while driving to the airport with some Croatian friends, I check the race results: 72 Registered, 51 Started, 29 Finishers, 1 TLE (Sander Boom), 21 DNF. Did not make the race ranking, but a TLE (Time Limit Exceeded) is still is way better than a DNF (Did Not Finish). I tell myself. Again.

Croatia is great. Next year there is a Velebit 100 mile (161 km). Maybe there will be a crazy guy on sandals at the start. And at the finish line. 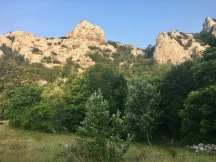 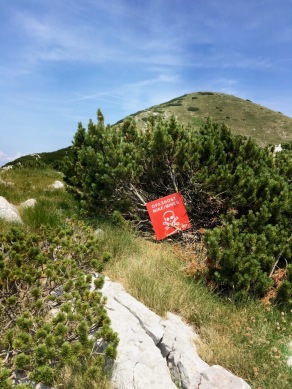 3 Reacties op “Velebit Ultra on Sandals: a TLE is Not a DNF*”