After finishing The Great Escape last September, I realised it was time for a break. Time to get my chronic sinusitis sorted out, time to slow down a bit, time for some physical and mental recovery. But why in the first place would I participate in that particular edition of the Great Escape once again? Well, that is because there’s something called the Legends Slam. A couple of days before, I could not decide if I would go for another round or not. Not yet. So… I ran 100 miles to make sure I had some time left to decide until December.

What the Legends Slam means, is beautifully depicted in a recently released 1h23′ documentary. Created by a Dutch couple, Astrid and Joost. During the 2017-2018 season, they diligently followed 5 runners throughout the 4 races of the first ever Legends Slam.

If you like the idea of ultra running, and you want to know why and how pretty normal -maybe a tad disturbed- people tackle these kind of challenges, you might like to watch it. Click here for the English and Dutch subtitled version.

I can only recommend it. It contains some pretty strong images and tells the story of an emerging ultra community in the Benelux. Although I cannot really seem to get used to seeing myself in a movie. Leave alone seeing myself in the opening scene.

While my ultra running break will be slowly coming to an end in the next months, I realize that I didn’t write anything about Legends Trails since my 2017 finish (Legend After All). True, not every race gets a race report, although some of them like the magnificent 93 km Ardennes Mega Trail in the French Ardennes would certainly deserve one.  The Legends Slam story is a different ball game though: originally, I only intended to write about it upon completion.

Here is a collection of photographs, facebook posts and unfinished blog texts. It all came back to me while watching that movie last week…

When Stef Schuermans (Legends RD) asked me in March 2017 if I would ever run the 250 km race again, I answered I would need to find a pretty good reason to do so. Going for a for a top-ten spot, or do it on sandals, or coach somebody to the finish… None of that seemed likely to happen soon…

So I set my eyes on the Ut4M Xtrem later that year. But what does all that have to do with the Legends slam? The answer is to be found at the heights of the Belledonne Massif.

August 19, shortly after midnight. I groan with each step on my macerated feet. Ice cold rain keeps pouring down and I know I will not finish this thing called Ultra tour des 4 Massifs, Ut4M XTREM in short. The goal was to finish the 169 km and 11000 D+ on sandals. In one go. Until late afternoon, everything looked perfect. One dry night and a beautiful hot and sunny day made me jump for joy with the bottle of Stella Artois I got from the shepherds at Les Chalets de la Barrière, just before the vertical kilometer down. Almost in Rioupéroux when it happens: the expected and dreaded thunderstorm breaks loose. My bare feet crack, I pay the price for the lack of foot care during and after the Velebit race last June in Croatia. Nonchalance…

The base in Rioupéroux has been in chaos. My wife tells me tents blew away, there was some degree of panic and people were seeking shelter in the building. The nervous staff informs me the race is paused until further notice. And then announces that the race is canceled. I rip off my race bib and drink a couple of beers. Twenty minutes later, it seems to be on again. Valuable time passed and I did not perform any of my checkpoint routines. And did not take care of my feet. Halfheartedly, I resume the race, but apart from to the cracks in my foot soles, there seem to be some cracks in my resolve too.  Up there in the Belledonne it snows… Andreas Walszberg keeps me company and tries to cheer me up in the dark. But my damaged feet hurt and the night is endless. So, I decide to stop in Freydières, after 120 km and 8100 vertical meters of climbing.

No fun at all. Did not not like it a bit. Second problematic race in a row after Velebit in Croatia (Velebit Ultra on Sandals) … 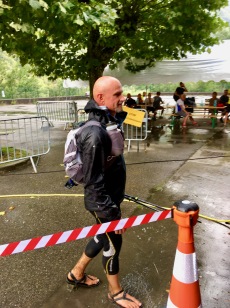 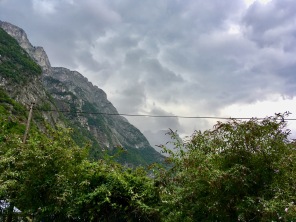 The same morning I decided to start The Great Escape. Another DNF to catch up. But also as the first race of the newly announced Legends Grand Slam…

In search of the next big thing…

Only one month to go until September. That will hurt. For sure. Here we go for the slam.

This is what I wrote the 25th of September 2017. “Number one is in the pocket. Three more to go. The Great Escape is a marvellous race. Thank you to the whole Legends team and the countless volunteers who took care of us, day and night! And all fantastic runners, those who finished and those who did not. For me it was a tough battle, so glad I made it.” 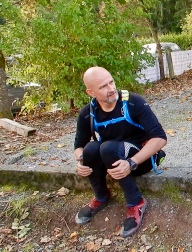 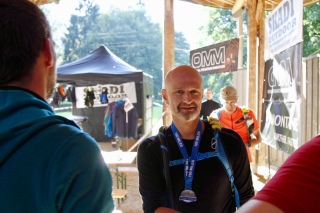 My feet hadn’t fully recovered yet, so I started with minimalist running shoes. Leaving nothing to chance. Knowing I would finish this race, that I already DNF-ed before (Big Fun, No Bling) in 2016. Beautiful race, not to be underestimated.

After the Burgos Way of Legends stage race, I didn’t train that much anymore. But it was time for the second trial of the slam. Suffered, but finished neatly in time.

Strava entry says: “Beng! Slam#2 is in. Bello Gallico. Not really prepared, so this was very hard for me.”

Remembering that painful Bello Gallico, it was time to train. Did some great training sorties and I started to feel confident. During our family ski holiday in February, I developed pain in the left upper leg, more specifically the Gracilis muscle (somewhere in the movie you see it getting massaged just before the start) and I decided to stop training. Last day of February, I Went to Houffalize, read books and drank Orval. Two days to go.

Running in snow is fun, if you have the right gear. Kahtoola micro spikes are the right gear. So I enjoyed the first night, but I was slower than the year before. The painful muscle did not help and after a while my other leg got overworked. Stayed too long at CP1, but made up on my way to CP2. There I stayed again way too long (looks like the first edition in 2016 revisited, no?). And after the ice-covered Ninglinspo, I lost even more time at the Chefna. From there onward, a ferocious battle against the cut-offs started. One I should have won, but I didn’t. This is what I had to say about it the next day on Facebook: “My Legends Grand Slam journey ended at CP4, 202 km and 50 hours 34 minutes into this marvellous icy edition of the Legends Trail. Third race in the series. Still trying to come to grips with it… I felt very strong, but sloppy race planning lead me repeatedly into the cut-off zone. Overconfident? Defiant? Playful? Running alone for too long? Big congrats to all who finished, big congrats to all who started. Big thanks to all who helped, cheered, cooked, rescued,… It was legendary, it was beautiful.” 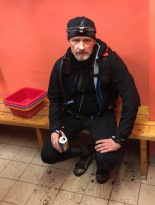 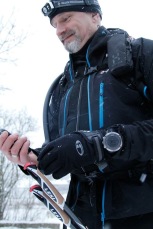 Well, it took me a while to accept the defeat… I still wondering what would have happened if I had walked out of CP4 immediately.

But then again…  This is what makes ultra running so beautiful. There are no guarantees, every race is a new battle… And the ones above 150 km are always unpredictable. Especially when the tired mind starts playing tricks on you.

Another One Bites the Dust

This race never came. New priorities after dropping out. The weekend before, I had to run the magnificent Ardennes Mega Trail. To collect ITRA points for the Ultra Trail du Mont Blanc. The road will lead to Chamonix in 2019. I knew I was selected but still needed to collect 10 points and you don’t get those at Legends.

PS: the next batch of 6 points, I collected this summer on the Ut4M Xtrem 2018. The above 2017 DNF has been rectified. On sandals all the way.

The next big thing…

With Paige and Buzz, doing the 4-day Challebge 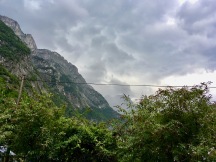 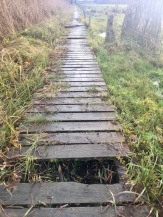 At the start in Grenoble 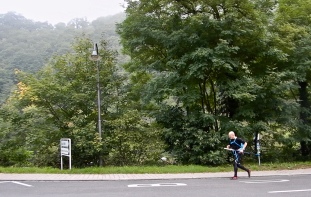 Morning in the Oisans 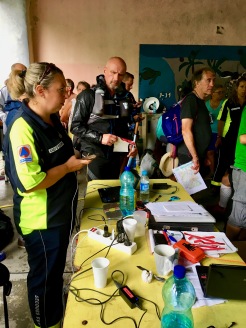 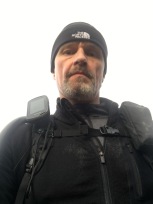 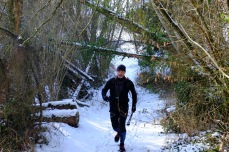