“You better finish this time, we are not coming back to Grenoble next year.” I think about Sofie’s words. That was yesterday afternoon. A couple of minutes ago, the somewhat nervous looking responsible of the L’Arselle check-point came by to address runners one by one: “The temperatures have dropped up there, the feel temperature will be around minus ten degrees. If by any chance you are considering to give up, please do it here and now, as there will be no possibility for evacuation for the next eight to ten hours. And by the way, the passage of the Grand Colon is taken out, too dangerous now.” Sitting on one of the camp beds, I overthink the situation. Yes, last year I quit the Ut4M with blistered feet at km 112 after a stormy night in the Belledonne. In 2016, there was a successful Ut4M Challenge. With family holidays in the Chartreuse the month before. In 2015, I finished the Ultra Trail Vercors, with some holidays in Gresse-en Vercors the month before… It’s true. Since we discovered the Chartreuse in 2004 and especially since I started trail running back in 2014, there has been a lot of Grenoble and surroundings. I just keep on coming back, like a pilgrim in my sandals. With or without my loyal following.

I put on my Montane wind proofs, take out my bonnet and gloves and put my head torch within reach. Oh yes, for the first time in my life I put on five fingered merino socks in my Luna Sandals. No DNF this year, that’s the plan. Off we go.

The last daylight. On my way to Croix de Chamrousse (2240 m) I check my watch. About 94 km and 1700m altitude (cumulated about 7300 D+). And already pretty cold. I decide to hook up with a couple of British runners. They have a pretty steady pace, close to mine. Staying alone tonight does not seem like a good idea… Some serious stuff going on up there. First rain drops fall…

Earlier this month I wondered what to do. Unmotivated, overweight and with an ego bruised and battered from falling out of the Legends Slam, my options were limited. It was five to twelve -rather two to twelve- and I had to make a decision whether to start Ut4M or not. The apartment in the Belledonne was booked and paid for. The ferry from Corsica to Nice was scheduled. But no way I could stay there and watch this thing unfold from the sidelines. No way at all… Knowing that endurance does not fade in a couple of months, I took a bet. If I could manage to train some in the Corsican mountains… maybe… The first runs were horrible. Deadly tired after 1000 D+ and and less than 20 km, I painfully realised that the Ut4M was a tenfold of that. A mind blowing 170 km with 11000 D+… But by the end of the week I felt the power returning.

Friday. At the start in Seyssins, almost 4 o’clock in the afternoon. I have mixed feelings. Chat some with Johny, an athletic fellow Belgian. He’s also a bit worried, this race is a beast after all. Although there was talk about snow in the Belledonne, I put on my sandals. The forecast is less than brilliant, so I put Vivobarefoot shoes in each of the drop bags. And plenty of spare clothes.

The afternoon start in Seyssins is a magnificent improvement. We run straight into the Vercors and reach Le Moucherotte by daylight. Last year it was already dark…

Le Moucherotte (1820 m) by daylight, in the distance Pic Michel.

I feel pretty good, and estimate it might be possible to reach Pic Michel before dark too. After seeing my family on the way up, I expect to meet them at the Lans-en-Vercors ravito. Strangely, nobody there. Maybe they went home to the Belledonne already… No time to worry. I speed up, building the time buffer I will need later in the race.

Night falls at the Pic Michel. Misty, cold and windy. Then a long steep descent toward Saint Paul de Varces. This is the  third time I do this stretch. I know about the mean little hill coming before the base-de-vie in Vif, and I manage my speed and expectations well. So far so good.

On the descent to Lans-en-Vercors, with Bertrand (Ultra Raramuri) 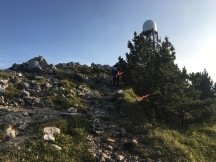 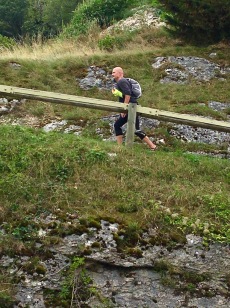 Speeding up the hill 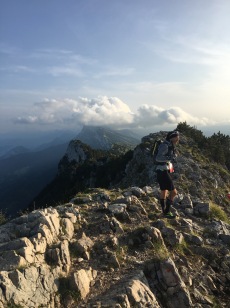 A colleague sandalizer, Yoann. Right behind me.

Dammit,the climb to Laffrey is steeper and longer than I remember. Nice place, but even with the campfire it is cold, windy  and humid at the lake. I take some local ravioli and soup before heading back into the night. I will sleep some in in La Morte. Looking forward to it.

After a refreshing 30′ sleep in La Morte, which will be the only sleep during this race, it is time to tackle to long ascent to Pas de La Vache. Cloudy and early in the morning, what a difference with the previous years. Under a blazing sun, this is a killer. Still it remains a tough one today. With burning legs I watch bright coloured dots progressing against the wall, hundreds of meters above me.

Up there, again very windy, but still dry. I am impressed by the crisp view above the clouds. Still on sandals and feeling great. 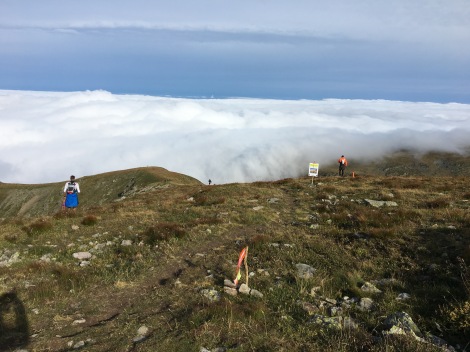 At the next ravito, Lac du Poursollet, I score a beer and have a picture taken with Yoann Robin, a young guy running the XTREM on walking sandals. We joke with the photographer. About beer drinking tourists on sandals invading the Ut4M.

The weather deteriorates. Mist. No views of those beautiful lakes… I realise things will become tough. Hurry to Les Chalets de La Barrière, where I score another beer before tackling the steep descent to Rioupéroux. Where things started to go wrong last year.

This time things go much smoother. I am surprised by how well it goes. But still, a vertical kilometer down always feels like an eternity. My family awaits me and Sofie tells me they have been towed from the Vercors last night and the car was revised in a workshop in Grenoble just this morning. But they didn’t call me… just to make sure I could focus on the race. Feel the love… Proud of my girls.

At Rioupéroux, I take an ice cold shower, no other option,  and change clothes.

I should have taken a nap while I could. This is the slowest I ever went. Time melts away on this vertical kilometer up.  Where is the brisk pace of last year? At a certain point, I decide this cannot go on. I crouch against a tree and close my eyes. Ten minutes later I open them again. And find the speed has returned. Goes to show that the brain dictates the muscles into fatigue. I take my time at Arselle. And decide to push on. Just to find out that the weather at Croix the Chamrousse (98 km, 2240 m altitude)  is pretty spectacular. Take the soup at the tent and rush to Refuge de La Pra (104 km, 2215 m altitude). The Grand Colon route has been closed this afternoon. Too exposed to be secured in this weather. In the mean time Bertrand has joined the party. His calm is contagious. Yet, the journey seems endless and we look forward to the refuge. Aaah… only cold water and no shelter… We leave the refuge as quickly as we can and start the long descend to Freydières. This is where I finally cracked last year. No way this time. In the early morning I finally reach Saint-Nazaire-Les-Eymes. Looking forward to that hot shower.

No pictures of this stretch… dark and rainy.

In Saint Nazaire, I find tens of challenge runners sitting in the corridors. They do the same circuit, but spread over over 4 days. Did it in 2016 (see The Sandalization of the Ut4M Challenge). It is all a little too chaotic for my tired mind and I focus on taking that hot shower. Change clothes, but keep the sandals. For some reason I put on socks again. Will regret later.

Leaving all alone, I suddenly realise the Challenge runners will depart in less than 2 hours. Uh Oh. Some time later, it happens. These guys speed up the last massif in such way I feel like a snail. I have to step off the narrow track time after time to let them pass by. Surprisingly, I get motivated instead of irritated. Speed increases and I am happy to meet some old friends. Philippe and Pascal from Dreux, several colleagues from Ultra Run Raramuri and Belgian Legend Arno Lux.

After a slight dip at Habert the Chamechaude, I reach Le Sappey. Almost home. My youngest daughter takes the microphone and yells “Allez Papa”. Tough climb to the fortress of Saint Eynard. On the way down I lose speed, my feet hurting like hell. Suddenly I realize: it is the socks, my feet are being cooked. Time to take them off. Better.

I spend the last 20 kilometers with Bertrand. We are old warriors. Survived the Ultra Run Raramuri in Mexico together. We will finish this one too.

The big loop in Grenoble. And there we are. Finishers of the UT4M Xtrem. After 51 and some hours.

Next year we wont be back in Grenoble. For sure. But the ITRA points collected will serve me well. Guaranteed access to the Ultra Trail du Mont Blanc in 2019. The Road to Chamonix takes a final turn.