I started to appreciate French Flanders some time ago. Historically part of the prosperous County of Flanders in medieval times, scene of some of the bloodiest battles in World War I and re-discovered by the French in the popular movie “Bienvenue chez les Ch’tis”, mocking the particular language spoken in the region, but also a tribute the director’s mother region of birth.

Most of all, I like the “mountains” and the scenery, with the historical cities and lovely villages littered around the Belgian border. Wineries and belfries, war cemeteries, mine and bomb craters, were so many perished, now turned into lovely ponds. And giants dancing in the streets. Sometimes.

When I read about the plans to organise an ultra trail in the region, I decided to join. The first edition did not fit into my schedule, the second one did. So very optimistically, I already ordered my ticket and accommodation early January.

Fifteen very short training runs later, this is how I find myself on a sunny April evening; sitting in the shadow of the belfry in Bailleul, drinking another 3 Monts beer -the French developed themselves into a nation of beer brewers and drinkers over the last decade- and wondering how I would ever finish this race. And, to make things a bit more challenging, temperatures will be in the high twenties tomorrow. Chatting with some friends, I state “Happy to reach halfway, a finish will be a miracle”.

But in the end I did. And I loved it. My Luna Sandals took me over the Mont Noir, Mont des Cats, Mont Rouge and Mont Kemmel in Belgium. Must have been since Heroes Ultra Crete that I saw such enthusiasm for an ultra run among the local population. Proud of their identity. The check points are marvellous. Folk music bands, rock ’n roll, dancing giants… Mythical places I saw in cult movies like camping Kosmos, the ski lift to Mont rouge. Memorials and cemeteries. Bomb-craters with squeaking frogs, forest full of hyacinths. Winding tracks, ever up and dow those Flemish mountains. That’s how the almost 2000 vertical meters are built.

Not that technical, and a bit too much bitumen for my taste, but still strongly recommended. For its spirit and its people. And the scenery. And the big bottle of 3 Monts in the goodie bag.

Now I have to work on my come-back. Some gnarly Cathar castles to be conquered in 2 weeks from here. 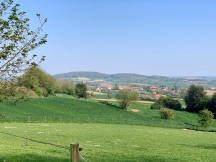 Somewhere on a Mont

Somewhere along the way

Somewhere along the way 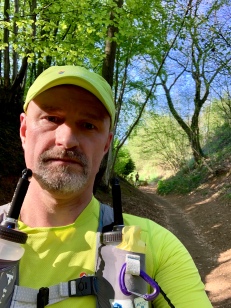 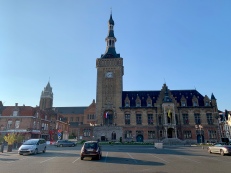 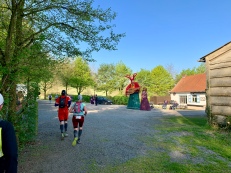